Hoi An is an old town lying in the lower section of Thu Bon River, on the coastal plain of Quang Nam Province, Vietnam, about 30 km south of Da Nang. Ancient and peaceful, Hoi An is in the top 10 of the most popular destinations in Southeast Asia that caters to travelers of all tastes and across the continents.

Not as hazy as Hanoi and Saigon, Hoi An has a characteristic tranquility that makes people feel like the time has stopped. These things have attracted visitors from all over the world. The old town is fascinated by bungalows, pagodas, picturesque-pavement coffee and the ancient homes and surrounded by peaceful villages that have crafts such as carpentry, bronze making, ceramic… that bear its very unique mark. In total, more than a thousand places of interest. Its architecture is a harmonious blend of Vietnamese, Chinese and Japanese influences. The depiction of its formation, its once-prosperous merchant past, its progress and how it manages to become one of today are all well documented, in words and in priceless relics.

Hoi An is small enough for you to get around in on foot and the traffic is nowhere near as heavy as in bigger cities. The road is flat so you also can travel by bicycle, especially bicycle is not banned here. When the sun goes down, the street transforms itself into a fanciful space with hundreds of silk lanterns illuminating each street and along the Thu Bon River. In the evening, people gathered down the river to drop flowers. Hoi An’s nightlife is not extremely hectic and things usually get quiet after 22 p.m. Still, you can easily find some places to hang out and enjoy a few drinks, snacks or a game of pool and darts. According to Rough guides ( British Travel Magazine), Hoi An’s nightlife is one of the 25 best experiences in the world. 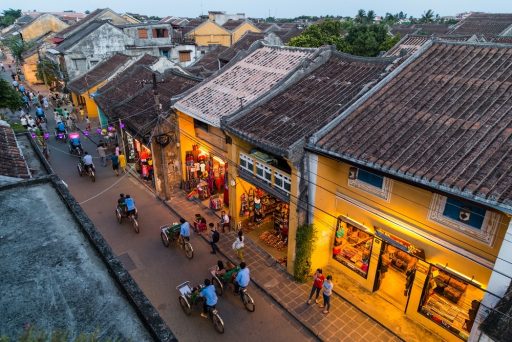 Hoi An is an old town lying in the lower section of Thu Bon River, on the coastal plain of Quang Nam Province, Vietnam, about 30 km south of Da Nang. Ancient and peaceful, Hoi An is in the…